Choosing the Right Fuel for Your Motorcycle

Higher-end motorcycles can easily rival what it costs for a new automobile. But no matter what you’ve paid, if you own a motorcycle or scooter, you’ll be tempted to save money buying the lesser expensive fuel – but this is going to cost you more in the long run. Using the right fuel for your motorcycle is important to its longevity and to your fun riding for years to come.

The fuel system is a vital internal system that ensures your motorcycle gets its essential power – fuel delivered to the right place in the right amount for the best performance. Like other parts of the bike, the fuel system requires looking after, but it doesn’t have to be difficult but more of a preventive.

Getting the Right Type Of Fuel For Your Motorcycle

Fuel is far too often overlooked as a form of preventive maintenance on a motorcycle. And any time you’re talking about fuel and fuel systems, your fuel filter needs to be included. If you have a fuel filter, check it regularly to make sure it’s clean and not clogged up. Don’t forget to check the bike’s fuel lines for weather damage and cracking – and replace if any wear or damage found.

Ethanol fuels are best avoided completely which takes some effort when fuelling up. Most pumps state how much ethanol is in use, but many do not. Ethanol is a fact of life now, with 10% ethanol blends being commonplace for a number of years. 15% ethanol has passed all of the approval stages and should be commonplace in fuel supplies.

Some US states like Minnesota are doing state-wide mandates to go up to 20% ethanol in the next five years, if not sooner. All of these mandates are aimed at improving air quality and reducing air pollution from fuel emissions, which ethanol blends achieve through the lowering of harmful emissions.

Ethanol fuels have many negative effects for your motorcycle. They have the issue of pulling water out of the air and into the fuel due to the chemical nature of the ethanol itself. When enough water is absorbed, the dissolved ethanol is likely to start to drop out of solution in a process known as “phase separation”. The free ethanol mixes with the water and sinks to the bottom of the tank (because water and ethanol is heavier than gas). When this happens, you’ve got some problems that could have been avoided such as gasoline that is stripped of its octane rating, or your fuel line drawing up a water/ethanol mix instead of gasoline. 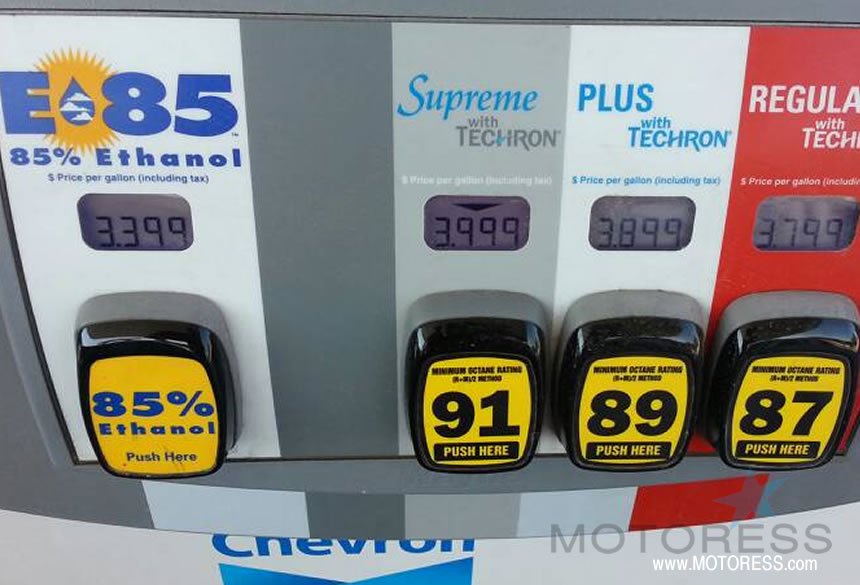 Ethanol Effects on Your Bike

Ethanol fuel, a gas additive, is everywhere! Nowadays, the gas you pump from almost every gas station contains a blend of gasoline and ethanol. The percentage of ethanol blend is indicated by the E number. For example E10 means the gas mixture contains 90% gas and 10% ethanol. In automobiles, ethanol fuel won’t do much harm to your car’s engine.

However, when you’re using gas with ethanol mixture in your outdoor power equipment, you run the risk of engine damage and incurring costly repairs. 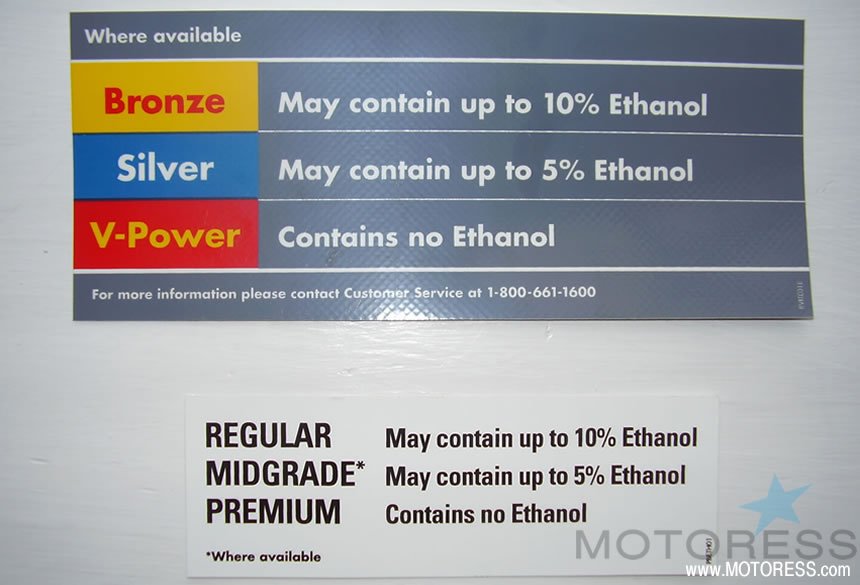 More Tips To Fuel You:

Air and light cause chemical reactions (oxidation) to occur in the fuel, producing discoloured gasoline with dark deposits collected on the bottom of the gas can or storage tank. These reactions happen faster in hot weather.

Fuelling up is important to the function of your motorcycle. Where you can and unless strongly otherwise advised from your manufacturer, purchase ethanol free gas. Always keep your fuel fresh and never buy and store gas for more than a 30 day supply.